South Cotabato is located in the southern part of the island of Mindanao. It is bounded by the province of Sultan Kudarat in the north and west, in the east and south by the city of General Santos and province of Sarangani. It lies at a latitude of about 6°15′ north and about 125° longitude. Its main access to the sea is through the Sarangani Bay where the modern port of General Santos City is located.

The place is generally flat dotted with some hills and mountains.

South Cotabato belongs to the fourth type of climate, that is rainfall is more or less evenly distributed throughout the year. The average number of rainy days for the year 2004 is recorded between 122 to 180 days with the months of May, June, July, August and October having the most occurrence.

Air humidity generally follows closely the rainfall pattern. Humidity is highest during the period of June to October with 88% being recorded at the Tupi seed farm. The months of February and April have the lowest air humidity recorded at about 72%.

Maximum daytime temperature throughout the province is in the range of 36-38 degrees celcius, falling to 23-32 degrees celsius during the night depending on the elevation. The hottest period is January to April while July to December being the coolest.

The province is a key player in the merging of South Cotabato , Sarangani and General Santos City into one of the country’s fastest growing development clusters known as SOCSARGEN. SOCSARGEN serves as a gateway for the Brunei-Indonesia-Malaysia-Philippines East ASEAN Growth Area (BIMP-EAGA).

With its location, it is easily accessible from neighboring ASEAN countries via SOCSARGEN’s entryway, General Santos City , with its International Standard Airport that puts key cities in Asia just three to four hours flying time away.

There’s a Fish Port Complex that serves the region’s thriving fishing industry. The Makar Wharf is a major port-of-call in international shipping, and one of the most important ports in Mindanao .

All have paved the way to make the constantly evolving SOCSARGEN the venue for a synergetic relationship. SOCSARGEN’s gateway, General Santos City , is merely five minutes away from one of South Cotabato ‘s municipalities, Polomolok.

Geological Features
The geological formation of the province has been affected by uplift, subsidence, faulting, marine transgressions, volcanic activity and water erosion. Consequently, the geology of the province is notable in its great diversity. Basalt, andesite, rhyolite, agglomerates and similar materials from the base rock which is overlain with alluvium, much of which is of volcanic origin. Sedimentary rock is present in about 49 percent of the area of the province.

The General Geology of the Province

This is the oldest formation which consists of piedmontite schist, quartzo-feldspathic schist, quartz, chlorite epidote schist and amphibolite schist. The exposures are limited and might be concealed under Miocene rocks at the southeastern part of Cotabato Cordillera extending from Cotabato City to Sarangani Bay. Piedmontite schist and closely associated quartz chlorite sericite schist constitute the predominant rock units of the basement complex.

This type of rock consists of undifferentiated metamorphosed submarine flows. Largely spilites and basalt intercalated with schert, marble and sediments. The rock formations are disposed on a northwest-southeast belt, apparently occupying the whole extent of the Cotabato Cordillera.

A batholitic mass diorite, disposed parallel to and following the main Cotabato Cordillera, underlies the Southwestern part of the province. The rocks intrude the older formation of the area and closely follows the distribution of the older rocktypes. It is usually medium to coarse grained with crude foliation in some portions.

A fairly thick sequence of conglomerate, wacke, shale and limestone associated with basic to intermediate flows and pyroclastics is exposed throughout the whole extent of the province. In the Southwest portion, the lower Miocene sedimentary rocks occur in various, irregular and discontinuous patches overlying the older rocks. The rocks in this portion consist dominantly of conglomerate with minor wacke and limestone converted into a marbleized mass with crude schist city. The formation is intruded by diorite. A continuous belt also occurs in the Northeast to Southeast portion of the province fringing the arcuate or elbow configuration of the eastern part.

This is consists of interbedded conglomerate, sandstone and shale overlain by pyroclastics. In the southeastern part, the pyroclastics are represented by tuffaceous marl. The series is associated with a massive white to flesh colored limestone with slightly coralline to crystalline groundmass. The clastic member is basaltic in composition.

This formation overlaps the older sedimentary series and fringes the broad alluvial basin of Cotabato in the North. The clastic member consists of tuffaceous sandstone and shale with few lenses of conglomerate. The sediments are usually folded especially at the western flank of the Allah River near Banga.

The rock, represented by Mt. Parker and Mt. Matutum, consists of andesite igneous rocks with occasional dacitic facies. It covers a more or less symmetrical distribution around the core of the two mountains. The andesite is usually gray and porphyritic.

The rock formation surrounds the volcanic plugs and consists of a thick sequence of agglomerates, ash flows and associated pyroclastics rocks.

The recent deposits cover a broad area in the north where the southern extension of the Cotabato Basin is located. The deposit consists of unconsolidated gravels, beach and swamp deposits and raised coral reefs. (PENRO)

South Cotabato is rich in mineral resources especially in the mountainous areas of the municipality of Tampakan where Gold and Copper deposits are found. The municipality of T’boli is also a source of gold particularly in Brgy. Kematu.

The exploration activities of small scale mining companies in the province revealed an indicated reserve of 2.2 billion tons of copper and 2.4 million tons of inferred gold and about 2 million inferred iron reserves.

Non-metallic resources found in the province include sand and gravel, agri lime, shale, sandstone and jasperoid which are all pegged in millions of metric tons.

The clay deposit found in Tantangan and Tampakan which is best suited for pottery and bricks has an estimated reserved of about 622,203 cubic meters.

Upon its creation as a regular province, South Cotabato consisted of 11 municipalities, namely: Banga, General Santos (now a city), Glan, Kiamba, Koronadal, Maitum, Norala, Polomolok, Surallah, Tantangan and Tupi. These municipalties were established long before the creation of the province. Other component municipalities were constituted after it fully functioned as a province. A total of 18 municipalities have contributed much to the development of South Cotabato being one of the fast growing provinces in the country.

The birth of Sarangani Province, conceived from the municipalities of Malungon, Alabel, Malapatan, Glan, Maasim, Kiamba and Maitum has brought changes in the geography and political subdivisions of the province. That event left South Cotabato with 11 remaining municipalities.

Further, on August 16, 2000 , Republic Act No. 8803 was approved. This marks another milestone in the history of South Cotabato . This is an act that converts the municipality of Koronadal into a component city of South Cotabato . Thus, at present the province is left with ten (10) progressing municipalities and the City of Koronadal remains as its Provincial Capital.

Moreover, South Cotabato has a total of 199 barangays and two (2) more are being proposed and still waiting for the approval of the Commission on Elections (COMELEC). These proposed barangays are both under the municipality of T’boli.

South Cotabato is a province where people from various origins in the country converge and live in harmony despite the diversity in customs, traditions and dialects from their places of origin. 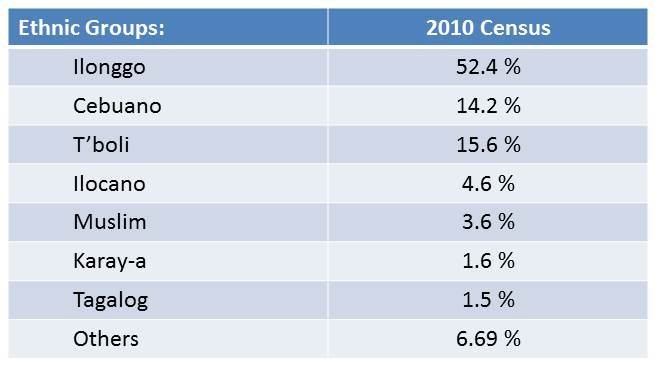